Power, passion and persistence are words that describe two-time U.S. Ice Dance Champions, two-time World Medalists and Grand Prix Final Champions Madison Hubbell and Zachary Donohue. The tall, stylish and innovative duo have long been known for their outstanding programs—consistently placing in the top 10 at the World Figure Skating Championships. In 2018, they stepped into the spotlight in dramatic fashion, pulling off one of the biggest upsets in U.S. ice dancing by defeating favorites Maia and Alex Shibutani to claim the national title. They decisively defended their title in 2019.

After successfully fulfilling the lifelong dream to compete in the Olympic Winter Games, Hubbell and Donohue shifted into high gear. They claimed the silver medal at the 2018 World Figure Skating Championships and have been undefeated since then—winning the U.S. International Figure Skating Classic, Skate America, Skate Canada, the Grand Prix Final and their second U.S. title.

Hubbell and Donohue have gained respect for constantly bringing new styles and themes to their free dance programs. “Every year, we’ve tried to think, ‘How can we make this unique?’” said Donohue. “We’re always looking to improve, of course, and get our technique better, but we’re really trying to push the boundaries.”

Stars on Ice has played a role in their development as performers. Last year’s post-Olympic Stars on Ice tour was an incredible opportunity to celebrate the season, connect with fans and hone performance skills.

Amazingly, Hubbell and Donohue never really had a try-out before teaming up in 2011. Former competitors, they had to be encouraged to get on the ice together and just skate around. After about hour it was a done deal. Four months later, they won the prestigious Nebelhorn Trophy in Oberstdorf, Germany.

In April 2015, Hubbell and Donohue took a big leap in their training and relocated to Montreal, Quebec to work with Marie France Dubreuil and Patrice Lauzon at the Gadbois Centre. Each day, they train side-by-side with some of the top teams in the world, which is invigorating and motivational.

Hubbell and Donohue recently appeared in a U.S. Figure Skating #YourVoiceIs video for National Bullying Prevention Month. She spoke about how her brother/former partner, Keiffer, had been bullied for being a figure skater. “Skating actually gave him a safe place to express himself, to find who he really was and be welcomed with open arms no matter who he wanted to become,” she said. “If you’re watching someone…being bullied, understand that you can have a bigger impact on their life than just stopping it. You can set an example,” said Donohue.

After making the decision to continue competing until 2022, they started this four-year cycle with fresh energy and the attitude to be open to the journey ahead. They vow to continue to try new things and explore the possibilities. Recent rule changes in ice dance allow them to let their creativity soar.

“If you’re only focused on the end goal, you don’t get a chance to enjoy the process and make memories along the way,” said Donohue. “Madi and I want to experience all that goes into the process and every step of the way. It really is a journey for us.” 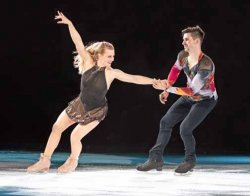 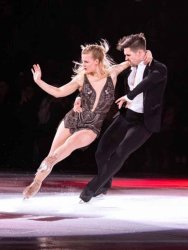 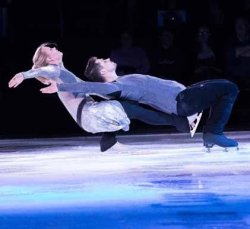 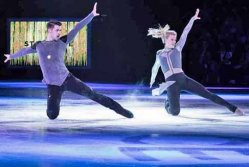