Polina Edmunds was 20 months old when she first stepped out on the ice and was just two when she started taking skating lessons.

So it’s little wonder that at just 17, she is now a two-time U.S. silver medalist, world team member and an Olympic skater.

Polina follows in the footsteps of her mother, Nina, who was born in Russia and is a former competitive figure skater.  Nina attended a master-rated physical education program in Russia and is an integral part of Polina’s coaching team. Polina’s family is her support system; she is very close with her dad and two brothers (both of whom are hockey players) who travel to watch her compete whenever possible.

Although her resume was strong, she was a newcomer to the senior ranks in 2014, the year of the Olympic Winter Games in Sochi, Russia.  Undaunted by the bright lights and the pressure of the Olympic season, Polina made quite a name for herself at the 2014 U.S. Figure Skating Championships by winning the silver medal and earning a spot on the U.S. Olympic Team.

Polina finished in the top 10 at both the Olympics and worlds in 2014, and was the youngest member of the U.S. Figure Skating Olympic team since Tara Lipinski in 1998.

This season, Polina won her second U.S. silver medal in Saint Paul, where she also earned a spot on the U.S. team for the Four Continents Championships in Taipei City, Taiwan and the World Championships, which will be held in Boston, MA.

Polina has established that she can compete with the top skaters in the world.  She won the short program at the 2016 U.S. Figure Skating Championships in St. Paul, Minnesota, and was the only top skaters in the field to produce two nearly flawless routines.

A proven technical commodity since her days at the junior and novice levels, Polina is now emerging as one of the top artists in the sport at the senior level.  She has worked very hard with longtime coach, David Glynn, and choreographer Rudy Galindo, the 1996 men’s national champion, to showcase her long lines and balletic style on the ice.

In addition to her ability to land difficult triple-triple jump combinations, the 5-foot-8 Polina shined in her short program, which she skated to Beethoven's "Moonlight Sonata" and in her free skate, which she performed to music from "Gone with the Wind.”

Having Polina play the role of Scarlett, the feisty character from “Gone With The Wind,” was ideal for Polina in the eyes of Galindo.  Just like Scarlett, Polina is in the midst of becoming a young woman. She has grown several inches since she made the Olympic team two years ago and she has matured as a person off the ice.

"The concept of Scarlett being a young woman and being strong, fearless and, yeah, sassy and spicy -- I thought that was the perfect fit for Polina," Galindo told The San Jose Mercury News. "She is Scarlett."

And very much Polina.

Academics are very important to Polina, as she is a full-time student, a senior at Archbishop Mitty High School in San Jose, California, and often takes school work with her when she is away for competitions.   In 2014, Polina was named “San Jose Sports Hall of Fame Female High School Athlete of the Year” by the San Jose Sports Authority.

This past December, Polina organized & choreographed "Skating in a Princess Wonderland" – two holiday figure skating shows at Sharks Ice San Jose.  Polina showcased not only her talent, but the bright future of San Jose figure skating.

Off the ice, Polina enjoys ballet, writing poetry, drawing and baking cupcakes.  Polina is an Athlete Ambassador for Right To Play USA and is very active with Kristi Yamaguchi’s Always Dream Foundation, which helps promote early childhood literacy in the Bay Area.

Polina looks forward to her first season as a full-time cast member with Stars on Ice. 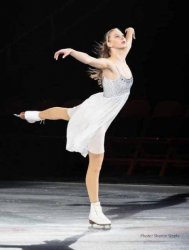