Ryan Bradley thought his competitive skating career had come to a close back in March 2010 when an injured foot landed him in 18th place at the World Championships in Torino. A longtime competitor and a natural showman, Ryan decided maybe it was time to entertain audiences instead of judges.

So he took some time off from competitive training, performed in several shows around the country and overall, he felt pretty good.

But inside, he knew he wasn’t finished. Not yet.

He didn’t reach his ultimate goal of competing in the Olympic Winter Games in Vancouver, finishing fourth at the 2010 U.S. Championships --- the top three men made the U.S. Olympic team --- but that didn’t mean he was finished.

His fans encouraged him to continue competing, too, sending him emails and messages on Twitter on Facebook persuading with him to give his competitive skating career one more shot.

Eventually, he decided to come back.

And, man, is he ever happy he did.

When he arrived at the 2011 U.S. Figure Skating Championships in Greensboro, N.C., many were surprised by his presence. However, once he started skating, Ryan provided more surprises. His short program was dominating, including an incredible quadruple jump and he became the overnight leader. In the free skate, Ryan scored enough points to secure his first U.S. title in 11 trips to the national championships.

"I need to go home and make sure this really happened,’’ Ryan said after his victory. “We were on the podium with our flowers and I was like, `I don't think you can smell in dreams.’ So I smelled the flowers to make sure I'm awake."

The flowers smelled beautiful, and yes, this has been a dream year for Ryan but make certain of this: It is no dream.

Since his retirement from competitive skating in March, 2012, Ryan spent time entertaining vacationers in skating shows aboard the Royal Caribbean Liberty of the Seas cruise ship. “I really enjoy the lifestyle,” says Ryan. “The small rink makes it really personal. You can look into their eyes; it’s like they’re all sitting in the front row. It was very appealing to me.”

Ever the consummate entertainer, Ryan realized a lifelong dream as he was invited to join the 2012 Stars on Ice cast, and tour the United States & Japan. This year will mark Ryan’s fifth year touring with Stars on Ice.

During the past three summers, Ryan was the headliner of “Sun Valley On Ice.” Ryan has performed with the renowned Ice Theatre of New York shows. The rest of his schedule is rounded out with ABC televised @DissonSkating specials, ice shows, teaching seminars and giving back to the sport he so dearly loves through the mentoring of young skaters.

In addition, Ryan has enjoyed his new role “off the ice” including commentating for Universal Sports, conducting behind-the-scenes interviews or in-arena radio.

“I feel it is very important to stay so involved in the sport of figure skating," he said. "I want to use my knowledge and passion to keep the sport moving in the right direction." 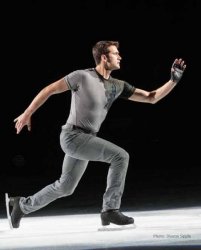